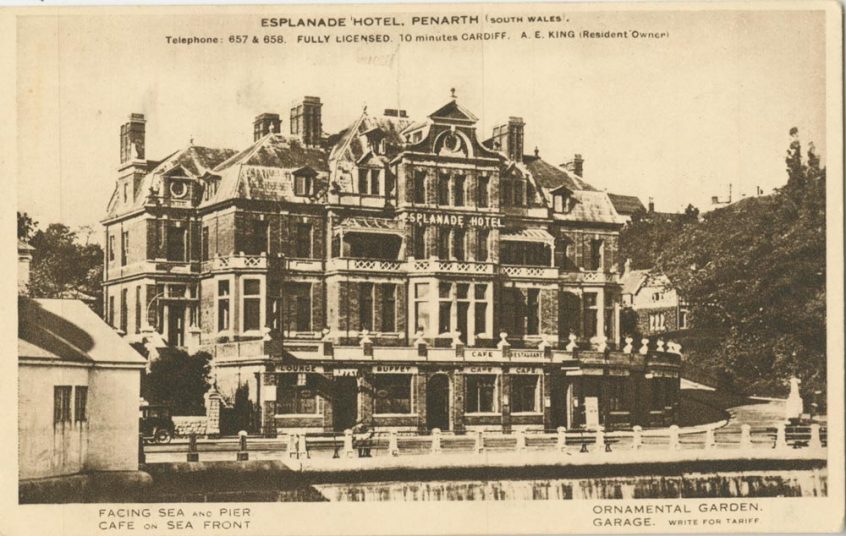 Penarth’s rich heritage notably began during the 1860s when the industrialisation of South Wales and its coal industry transformed the area, bringing work opportunities and a place to settle just outside of Cardiff. By the end of the 1860s, Penarth’s population reached over 3,000, and its newly completed dock yard made South Wales the worlds biggest coal mining exporter of its time.

Naturally, Victorian Penarth thrived and began building for some of the town’s most famous sports that we still love today. The affectionately named Garden by the Sea owes thanks to the numerous parks and buildings that we still have today, and thanks to its conservation area status, we can still enjoy some of the wonderful Victorian and Edwardian architecture today. We take a look at how the parks, open spaces, and buildings we see today have a rich past and shine a light on some of the town’s hidden gems.

It’s currently being transformed into a high-end gym and apartments, but it was built and opened in the 1920s by brothers Stanley and Aubrey Sadler for their automatic engineering business. Given its Art Deco styling, it’s a striking building which certainly would’ve caught passing drivers’ attention.

Originally a single-storey building, a second storey and ramp was added during the Second World War and was used as an auxiliary workshop.

Later in the fifties, ownership of the building changed hands, and it became a branch of Moorwell Motors Limited. It was where an R.F. Rosoman Esq. paid Â£540 for a brand new Sunbeam Imp Sport in polar white. Snazzy!

Following a short time standing empty, it will now swap brakes and tyres for running machines and dumbbell weights, as Anytime Fitness Penarth moves in.

In the beginnings, Westwood College was known as Penarth Tutorial College, and was located on Albert Crescent. Outgrowing its buildings, the college relocated a few times to different buildings on Stanwell Road, eventually settling in Westwood House. Closing its doors in 1944, it’s now known as the Penarth Conservative Club and its impressive veranda can still be seen today. The college was also closely located to what is today Westbourne School. Opening in 1895 in Ebenezer house the school was later renamed as Westbourne House Preparatory School for boys and expanded by purchasing St. Alma’s School for Girls on Victoria Road. The school later moved to the intersection of Stanwell and Hickman Roads, where the school is still based today.

Many people know about Penarth’s subway linking the town to cardiff under the Ely river, where Cardiff bay Yacht Cub now stands. Closed and bricked up in 1963, the subway still lies underneath the river and was used as an air-raid shelter during WW2. The subway, however, was built to replace the chain ferry that serviced Penarth Dock during the coal mining boom. The transportation of goods from the docks over the Ely to Cardiff Bay could only be used when tides were high and during good weather conditions.

The Post Office in Penarth has had many locations, however its former home on Albert Road has to be one of the most notable. With its Art Deco curved facade, it’s hard not to notice the building when walking through the town. Built in 1936 and designed by A. R. Myers, the building is Grade II listed and still has the yard at the back of the building which the Royal Mail still uses for delivery of mail and parcels. The yard was also by the horse-drawn carriages that provided bus services from Penarth to Cardiff until the early 1900s. The building is now used as aptly named Deco CafÃ©.

With its undeniable Jacobean style, the public baths housed two pools: a small pool to the left with a towering entrance, and a large pool to the right. Its octagonal tower and Bath stone facade is one of the most beautiful examples of Victorian architecture in the town and was used as public baths until the 1980s, when Cogan Leisure Centre was opened. Now converted into residential houses, the baths spent some time after its closure as a bar and restaurant, known as In At The Deep End.

Built in 1877, The Esplanade Hotel was one of the finest examples of Victorian architecture. The hotel has a rich history of welcoming holidaymakers to the Esplanade when passenger trains were booming. The hotel was also used during WW2 as a base for the RAF and after the war by the Barbarians rugby team. Sadly, a fire destroyed the building in 1977, and Alexandra Court apartments now sit in its place.