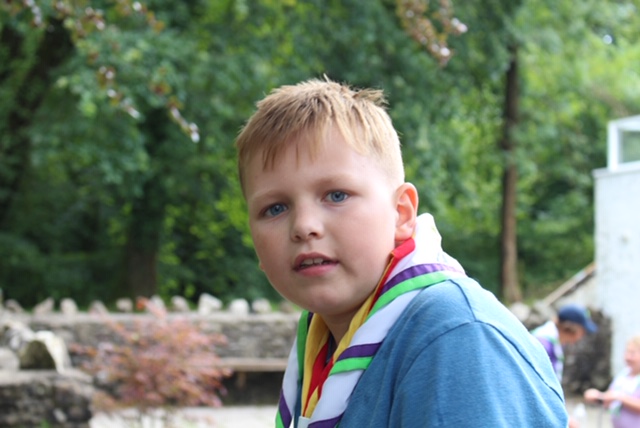 Tŷ Hafan Scout Group, the first Scout Group to be based in a children’s hospice in the UK, has been honoured with The Queen’s Award for Voluntary Service, the highest award a voluntary group can receive in the UK.

Set up 13 years ago, Tŷ Hafan Scout Group has provided opportunities to learn and grow in a fun and inclusive environment for more than 100 children since it started and is believed to be still the only Scout Group to be based in a children’s hospice in the UK.

Tŷ Hafan is the children’s hospice for Wales and is currently supporting more than 270 children with a life-limiting condition and their families across Wales, both in the hospice in Sully, near Cardiff, and in the community across Wales. The hospice has stayed open and operational throughout the pandemic.

Now, the group based at the hospice, including volunteer leaders Ruth Weltch and Steve Barkley, has been recognised for their outstanding contribution to the community.

“Tŷ Hafan’s Scout Group was started by volunteers Ruth Weltch and Steve Barkley and initially focused on the hospice itself and children with complex needs, meeting fortnightly.

“Very quickly it evolved to include siblings too, and in fact, some of our siblings have gone on to join Scout Groups in their local areas as well.

“In August 2019 we held our first Family Scout Camp at Miskin, where families, children with complex needs and their siblings all camped out together – and had an absolute ball!

“Throughout the pandemic, like all Scout Groups, we’ve not been able to meet, but we are thrilled to be able to announce that our first Scout meeting post-lockdown is planned for June, to take place outside in the hospice grounds, and the news that our group has won the Queen’s Award for Voluntary Service is the icing on the cake.”

“Our son Christopher has been attending the Tŷ Hafan Scout Group for over a year. Christopher has Hypoplastic Left Heart Syndrome which affects his mobility and he tires easily. He has found it difficult within other Scout Groups due to his limitations and the differences with his peers.

“In the Tŷ Hafan Scout Group he can be himself and activities are adapted to ensure inclusivity. The group go above and beyond to include all the children in spite of the capabilities and helps our son grow in confidence and new skills.”

“I’m really proud of this group and the work we are able to do at Tŷ Hafan. It’s incredibly rewarding as a Scout Leader being able to do these activities with children and young people who might not otherwise be able to access them. Tŷ Hafan Scout Group is very special to us and to our Scout Area.”

“As we celebrate the contributions of all our hundreds of dedicated volunteers during Volunteers’ Week, I am delighted that Tŷ Hafan’s pioneering Scout Group has been recognised with the Queens Award for Voluntary Service, the highest award a voluntary group can receive in the UK.

“From the moment our Scout Group was first set up in 2008, it was clear that it was a huge hit with our children and their families.

“Any child of any ability who is involved with the hospice in any way can join the group and over the years, dozens of our children with complex needs, their siblings and their families have taken part in Scout camps and activities at the hospice itself, enabling them to try new things, learn new skills, and, most importantly of all, have lots of fun and make some amazing memories.“

This award is a testament to the hard work and commitment to all those involved in our Scout Group and I know that the entire Tŷ Hafan family will want to join me in both congratulating them, and thanking them, for what they do, from the bottom of our hearts.”

Tŷ Hafan Scout Group is one of 241 charities, social enterprises and voluntary groups to receive the prestigious award this year. The number of nominations remains high year on year, showing that the voluntary sector is thriving and full of innovative ideas to make life better for those around them.

Representatives of Tŷ Hafan Scout Group will receive the award crystal and certificate from Mrs Morfudd Meredith, Lord-Lieutenant of South Glamorgan later this summer.  Furthermore two volunteers from Tŷ Hafan Scout Group will attend a garden party at Buckingham Palace in May 2022 (depending on restrictions at the time), along with other recipients of this year’s Award.

The Queen’s Award for Voluntary Service aims to recognise outstanding work by volunteer groups to benefit their local communities. It was created in 2002 to celebrate The Queen’s Golden Jubilee. Recipients are announced each year on 2nd June, the anniversary of The Queen’s Coronation. Award winners this year are wonderfully diverse.
They include volunteer groups from across the UK, including an inclusive tennis club in Lincolnshire; a children’s bereavement charity in London; a support group those living with dementia and their carers in North Yorkshire; a volunteer minibus service in Cumbria; a group supporting young people in Belfast; a community radio station in Inverness and a mountain rescue team in Powys.