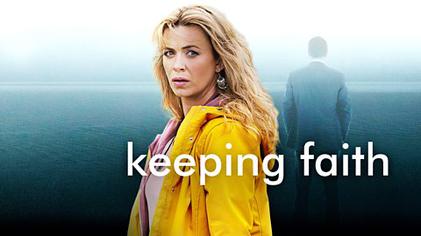 BAFTA award-winning screenwriter and twice CWA Gold Dagger nominated novelist, Matthew Hall, will be discussing his work writing both TV scripts and novels, including the TV phenomenon Keeping Faith, at a special event at the Penarth Pier Pavilion on Wednesday, 27th November, 7:30pm.

Hosted by independent bookshop, Griffin Books, the event will also include a Q&A with Matthew Hall and actor and Penarth resident, Suzanna Packer, who plays Delyth Lloyd in the TV series Keeping Faith.

In a screenwriting career lasting over 20 years, Matthew Hall has written over 50 hours of prime-time TV drama. He got his break aged 27, writing episodes of the hit ITV show, Kavanagh QC, starring John Thaw. His debut novel, The Coroner, was nominated for the Crime Writer’s Association Gold Dagger in the best novel category. His eighth novel, a stand-alone thriller, The Black Art of Killing, was published earlier this year.

After its first showing (as Un Bore Mercher) on S4C and in English as Keeping Faith on BBC Wales, the first series became the most watched non-network show on BBC iPlayer. It scored the highest drama rating for BBC Wales in 0ver 20 years and became a social media phenomenon.

Tickets cost £10 and include a drink on arrival and a discount on book purchases. Book yours now to avoid disappointment. For more information and to book tickets, contact Griffin Books on 029 2070 6455 or book online via: www.ticketsource.co.uk/griffinbooks