To mark the centenary of Armistice Day, Penarthâ€™s communities have come together to remember the sacrifices made during the Great War, the efforts of and effects on survivors, and the social changes that followed.

Over the past two years, local groups and individuals have met to share plans and develop projects together. 2018 has seen a number of important WWI related events in our community and this November brings a period of commemorations.

Joining the Silent Soldier that has been in place during 2018 is an installation highlighting Penarth Remembers. A curtain of poppies flows from the facade of West House, bathed in red light. This poignant reminder draws attention to Penarthâ€™s commemorative activities. West House Gardens is being redeveloped as part of Penarth in Bloom and is open to the public.

Glass By Design have developed a project based on the 32 Penarth lives that were lost during the War. Wireart poppies are being placed in shop windows of independent retailers, with information on each of the men who died, the Roll of Honour. 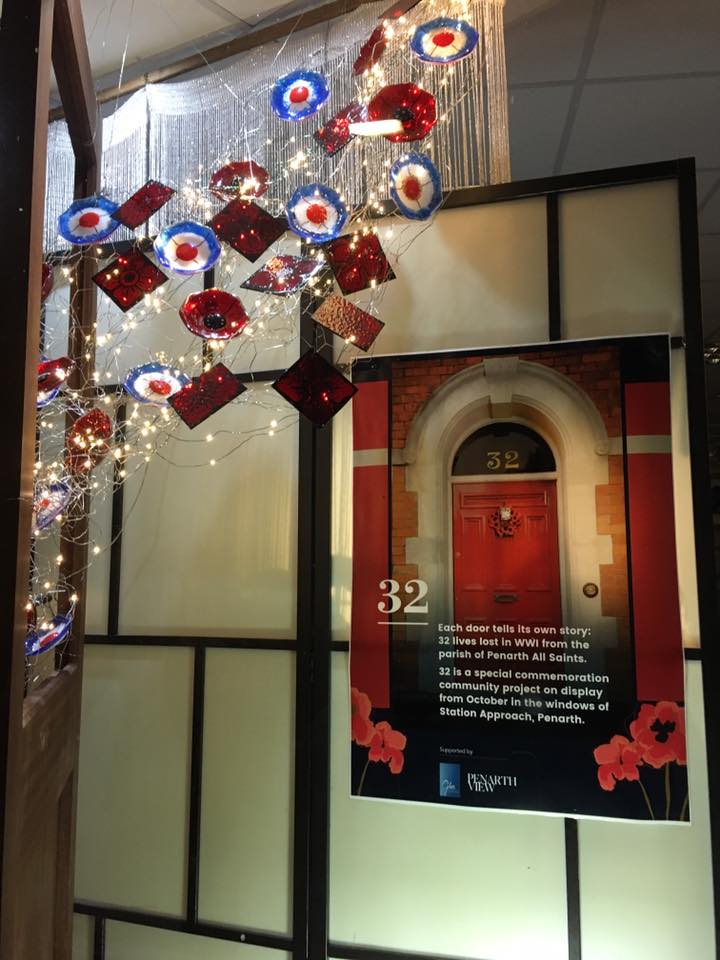 Over the past few years, Stanwell staff and students have been researching the names of the men on the Stanwell Roll of Honour in order to learn more about their lives and their service to their country.

As the nation marks the centenary of the end of the war, Stanwell are hosting an eventÂ Stanwell RemembersÂ to honour the sacrifices made. OnÂ Thursday 8th NovemberÂ there will be a pop-up museum displaying the findings of this research and willÂ include tributes fromÂ current students and those from our local primary schools. In addition, the Performing Arts students will bring some of the stories of these men to life through drama, music and dance.

The event begins atÂ 6pm until 8pm.Â Tickets are Â£3.50 per person and all proceeds are to be donated to the Royal British Legion. Tickets are available from Stanwell Schoolâ€™s reception. This event is open to everyone who wishes to join us. 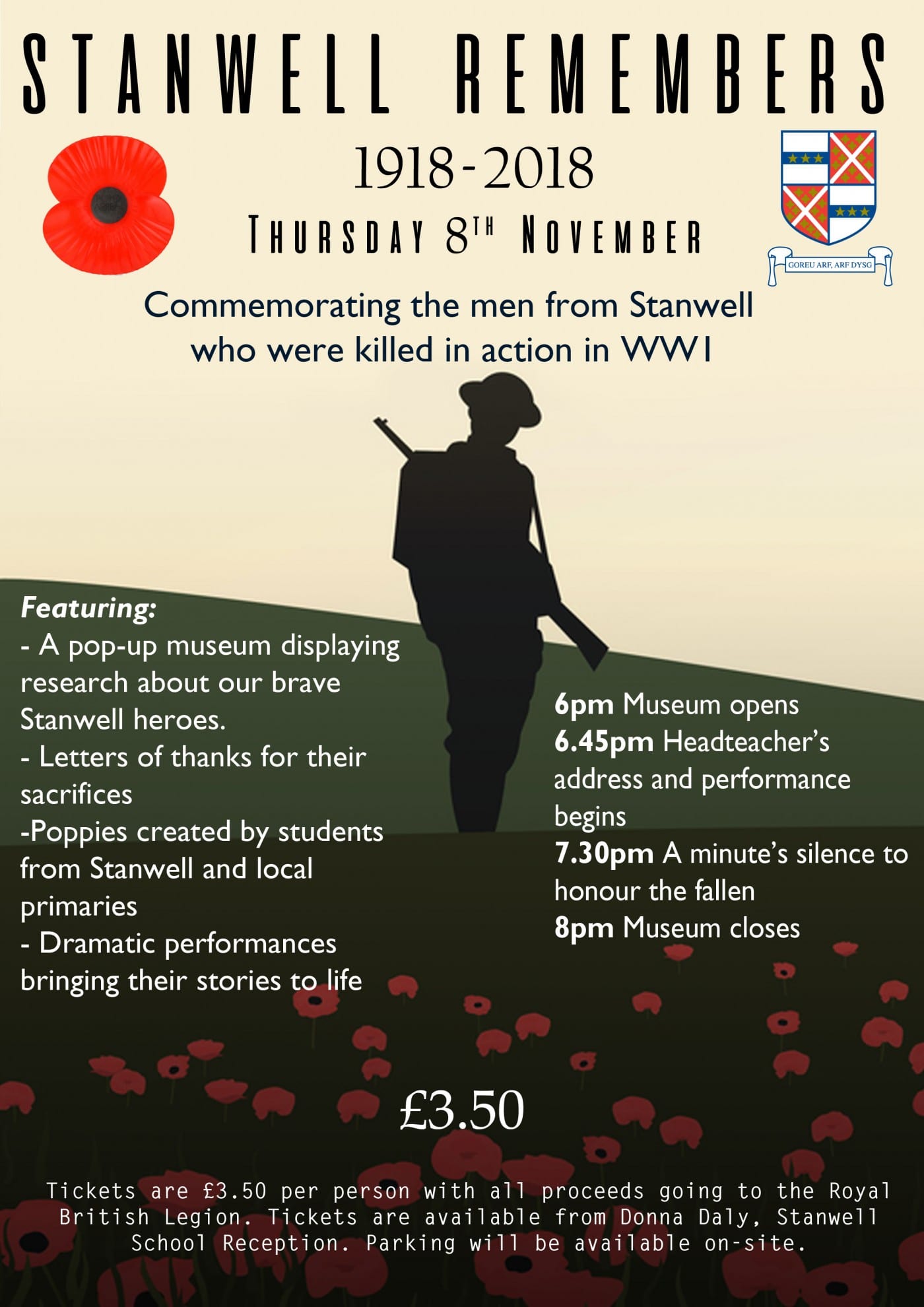 On behalf of the town, Penarth Town Council is dedicating a commemorative oak at Cliff Walk to mark the Centenary. Groups and individuals who have joined together over recent years have been passionate that a living memorial was placed for those who lost their lives, those who supported the war effort, and those who survived. A short service will be held. Many thanks to Richard James and Roger Munday.

11am â€“ Garden of Remembrance ServiceÂ

‘The Penarth Civic Society is proud to contribute to the World War 1 commemorations by planting a beautiful Rowan tree in the Garden of Remembrance.

The Civic Society’s aims are to cherish the best of the town’s heritage – and what better way than planting a tree to continue the splendid tree canopy of Penarth in acknowledgement of the sacrifice of the men and women who lost so much in protecting our town and country.’

Victoria Cross memorial stonesÂ â€“ Join us as we unveil and dedicate two new memorial stones to Penarthâ€™s recipients of the Victoria Cross,Â Capt. Richard Wain and Sgt. Samuel Pearse. These tributes become a permanent fixture of Penarthâ€™s Garden of Remembrance on Rectory Road. The local community welcomes the regiments and the families of both men to this service.

Learn more of Penarthâ€™s VC recipientsâ€™ stories as the community comes together to share the commemorations. Along with hearing the stories of Capt. Wain and Sgt. Pearse will be an opportunity to see numerous projects developed by community groups and schools, memorabilia, history displays, music and film.

This event is free to enter. It has been developed by the participants to share and pass on knowledge of the Great War.

Special thanks to Dr Jonathan Hicks.

This is an opportunity to:

The ChurchÂ  will be open, with a display based on the 32 young men from our parish who perished in the War.

Refreshments will be served during the afternoon

Also invited areÂ  the families of the 32, found in 2016 when the memorial to the rededicated in church, along withÂ the families of the houses traced last year who now live where the men set off for War. Last year these families kindly agreed to place poppy wreaths on their doors or gateposts and they are part of our story too.

Entertainment by children from local schools and â€˜Gentlemen Prefer Blondesâ€™. The Royal British Legion will be in attendance for a traditional finale remembering the 32 men from All Saints.

The parade will leave Station Approach at 09.45hrs and proceed via Rectory Road to the Garden of Remembrance at the corner of Alexandra Park.Â Â After the Wreath laying ceremony we will march toÂ St Augustineâ€™s ChurchÂ for the service which will start at 10.30hrsÂ Â A Community Bus, provided by EVCT will be available for those who feel unable to carry out this journey on foot.Please contact the Penarth Town Council at West House on 029 20700721 at least a week before this event if you will require assistance.

Â All who feel inclined to join us on this march will be most welcome.

This yearâ€™s Remembrance Sunday will of course fall on Armistice Day, as well as marking the centenary of the first Armistice Day. It was probably the most important day of their lives for so many who lived through those tragic and turbulent times, and still holds great significance for us today. We would be very pleased if you could take part in this parade. The service will be held at St Augustineâ€™s Church and attendees are asked to be seated by 10.30am.

The parade will assemble at 0930 at Station Approach to march off at 0945. It will then proceed via Rectory road to the garden of remembrance in Alexandra Park for the wreath laying ceremony, followed by the march to St Augustineâ€™s. the parade will fall out at St Augustineâ€™s Place for us to enter the church for the commencement of the service. Standards will be paraded and decorations worn.

After the service, the parade will reform and proceed via Albert Crescent, Albert Road and Windsor Road to the Ex Servicemenâ€™s Club where the parade will terminate for refreshments.

Please join us in the Ex Servicemenâ€™s Club for refreshments after the parade.

Short service to remember those members who lost their lives.

Â£8 â€“ Tickets from Griffin Books, Eventbrite, or on door.