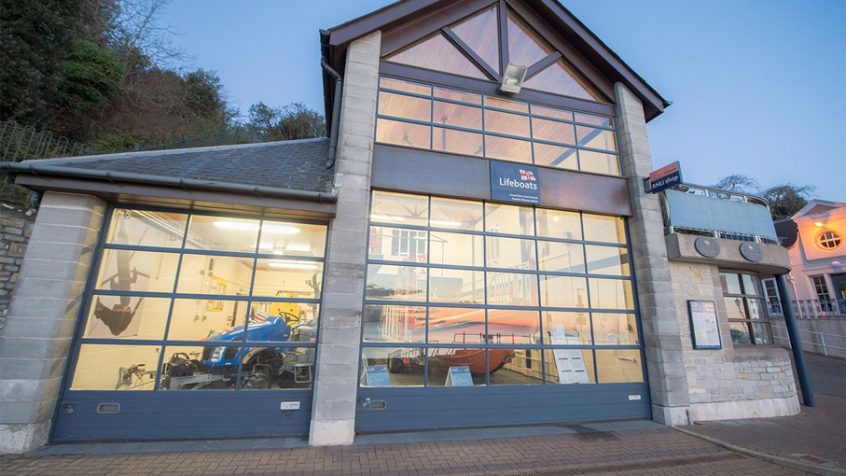 In 1980 the new lifeboat was housed in a local private garages, but soon a better â€˜stationâ€™ was developed in the deckchair store (now underneath the new Coffi and Co cafÃ©!) before moving to its current home, a purpose built station opened in 1995.

Gareth Wigmore, one of the first crew members in 1980 and now station President explained that the lifeboat was pushed by the crew along the seafront, which at the time wasnâ€™t even one way.  â€œWe were keen as mustard, please to be doing our bit for the community, but we had rudimentary equipment back then. Some of our protective equipment was made by the local community!â€

Long-standing crew member Karl Lawrence has 31 years experience with the RNLI and says, â€œThe best part of lifeboating is working well as a team. We maintain this team spirit by regularly exercising and training both ashore and afloat. Since opening our new station at the south end of the Esplanade we have installed a training room which is ideal for providing training in a warm, well-lit and stable (!) room, prior to practicing on often rough seas in the lifeboats.

My favourite â€™shoutsâ€™ are oddly those which occur in the early hours of the morning on a spring day. By the time the job has been completed and the boats are washed down and prepared again for service, we gather on our balcony drinking tea or coffee, watching the sun rise and exchanging with each other our plans for the day ahead, before most other people have woken up.â€

Celebrating the success of the station Jason Dunlop, the current lifeboat operations manager said â€œI am incredibly proud to celebrate the stationâ€™s 40 year anniversary. It is testament to the community of Penarth who have supported the lifeboats by providing volunteers, funds, and ongoing support. This community effort over the past 40 years has saved 196 lives, we have rescued or aided 2267 people and our lifeboats have launched on service 1689 times. Hundreds of volunteers have supported the RNLI and the station in this time. I would like to express my thanks to them all and their families.

It makes no difference if the role people have played is to crew the boats,Â Â to assist launch on shore, provide community safety advice, run our shops or fundraise, everyone plays a vital role in saving lives. The RNLI is funded by donations and receives no government funding, so if you are a fundraiser, a member of our shop team, a local business who supports us or a member of the comunity who has donated or raised funds you have help us to save lives.Â We are all one lifeboat crew and we are part of the comunity of Penarth. The RNLI is built of the vision that â€œwith courage, nothing is impossible.â€ I believe that the comunity of Penarth is a living example of this vision. As we say in the RNLI. Fair winds and following seas.â€

To mark the official day of reopening, at 11am on the 17thÂ June the Station’s Facebook followers are invited to a live online Q&A session.Â Â It is hoped that people will be able to share their memories of the lifeboat and the contribution that the station has made to the local community.Â Additional events to mark the history of the lifeboat in Penarth will be promoted throughout the year once lockdown eases.