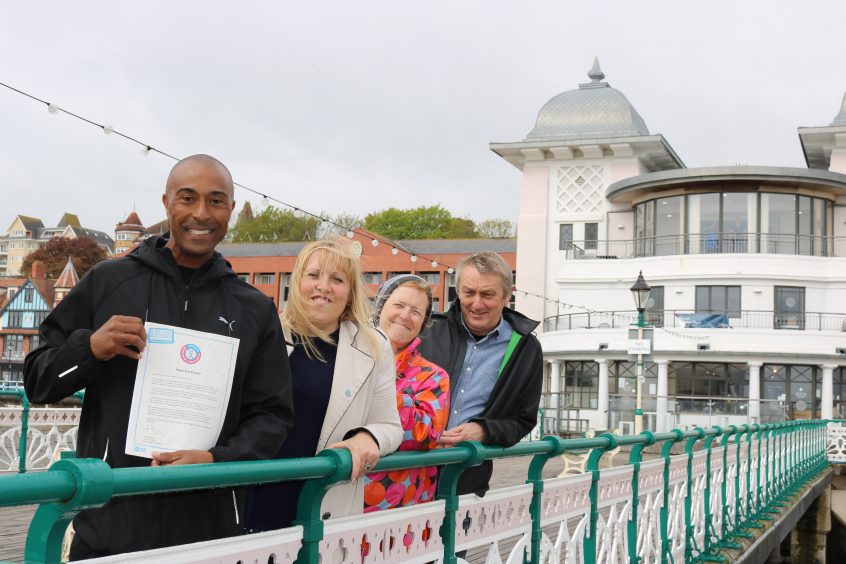 Visit the websiteYou saw them in Penarth View
Penarth has joined a network of communities across the UK who are leading the way on tackling throw away plastic. The town has been awarded Plastic Free Community status by marine conservation charity, Surfers Against Sewage (SAS), in recognition of the work it has done to start reducing the impact of single-use plastic on the environment.
Local resident Anthony Slaughter of environmental organisation Gwyrddio Penarth Greening (GPG) started the campaign last year, together with other members of the community after a GPG public meeting on the issue attracted strong public interest.
Registering with the SAS Plastic Free Communities movement, Anthony pulled together key organisations and businesses in the town to put in place a five-point plan. The objectives include; setting up a community led steering group, instigating the SAS Plastic Free Schools education programme, getting local council commitment and working with local businesses, organisations and community groups to spread the word and minimise the amount of disposable plastics they use.
Â Anthony Slaughter said, â€˜Support from the local community has been key to our campaignâ€™s success. This was an issue that was already a concern to many and they welcomed the opportunity to be involved with practical action to tackle the problem.â€™
The campaign received strong support from local independent businesses, many of which were already taking steps to reduce their use of single use plastics. Alison Jones, owner of local restaurant the Crepe Escape had already replaced plastic straws, cutlery and cups in her business and played an important role in the campaign steering group by engaging and encouraging other local businesses. Other businesses in the town took actions such as stopping the sale of drinks in plastic bottles, using no plastic packaging and much more.
In addition to several public meetings to raise awareness of the issue, the campaign also took part in the annual GPG Apple Day event and the Mayoral inauguration day. The campaign also benefitted from extensive coverage and promotion by the local press and radio station.
Other local community organisations and schools aided the campaign with their engagement as allies. This included an invaluable survey of local businesses by Penarth Youth Action, and a beachÂ  Â clean arranged by the local scout group.
Gideon Calder, GPG Chair and steering group member said, â€˜We are delighted that the communityâ€™s efforts to tackle this important issue have been recognised with the award of the SAS Plastic Free Community status. As a group we see this as the start of an ongoing campaign and next steps will include a project with local schools and working with local take away food businesses to reduce the use of both single use plastics and polystyrene packaging. Of course, Penarth will never be completely free of plastic, but this campaign will seriously reduce the use of polluting single use plastics in our community.â€™
The Surfers Against Sewage Plastic Free Community network aims to free the places where we live from single-use. Using the five point plan the aim is to empower communities to kick start local grassroots action, which can then be built upon.
The marine conservation charity, based in St Agnes in Cornwall, says it wants to unite communities to tackle avoidable plastic from the beach all the way back to the brands and businesses who create it. It says it is not about removing all plastic from our lives, but kicking our addiction to throwaway plastic and changing the system that produces it.Â Rachel Yates, SAS Plastic Free Communities Project Officer, said: â€œItâ€™s great to see the work that Penarth has done to reduce the availability of avoidable plastics, raise awareness and encourage people to refill and reuse.

â€œWe have over four hundred communities across the UK working to reduce single use plastic and the impact it has on our environment. Every step those communities and the individuals in them take is a step towards tackling the problem at source, challenging our throwaway culture and encouraging the habit changes we need to see.â€