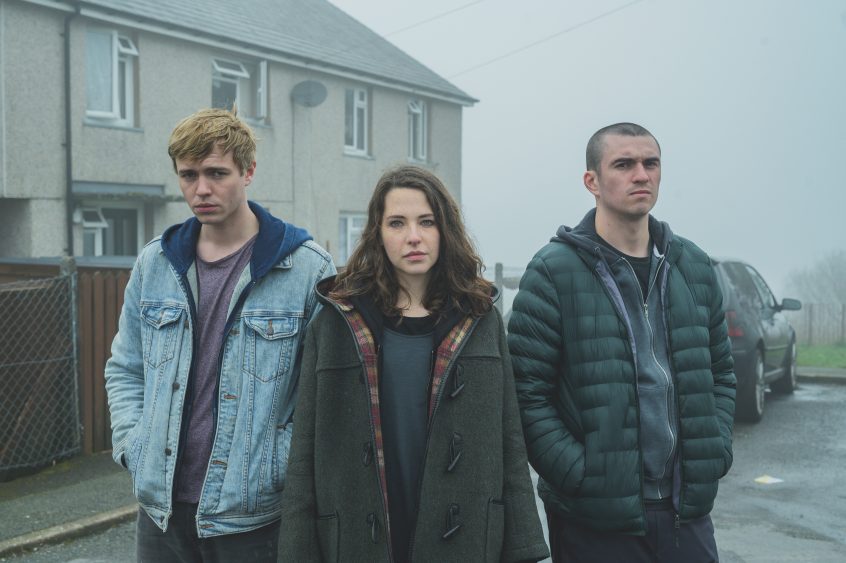 The hit crime drama Hidden continues this year with a six-part second series following the success of the chilling first series.

Returning to BBC One Wales on Tuesday 11 February at 9pm, the second series, set nine months after the events of series one, Hidden (also known by its Welsh title Craith) will see the return of DCI Cadi John (Sian Reese-Williams) and DS Owen Vaughan (SiÃ´n Alun Davies), and will tell the story of another shocking murder.

When the brutal murder of an ex-teacher is discovered following an anonymous phone call, Cadi leads an investigation in the slate-strewn mountains of Blaenau Ffestiniog.

While Cadi and Vaughan have a new case on their hands however, three young friends (Mia â€“ played by Annes Elwy, Connor â€“ played by Steffan Cennydd and Lee â€“ played by SiÃ´n Eifion) have blood on theirs. As their lives – and the investigation – unravels, they soon find out there is nowhere to hide.

One of the main characters, Mia, is played by Penarth actress Annes Elwy. Here, Penarth View asks her about the role, her career and the draw of Welsh-noir.

Can you tell us a bit about you?

I’m from Penarth, with my mother’s side from Llanfyllin, and my fatherâ€™s side from Swansea. The ‘Elwy’ part of my name refers to Llanelwy, north Wales, were my grandfather came from.

I trained at the Royal Welsh College of Music and Drama, and after graduating I spent a few years doing various plays, including at The Royal Court in London, which had always been my ultimate dream when I was training, and fully lived up to it. I then decided I wanted to return to screen and keep learning, so I did a few smaller TV roles, before landing the role of Beth in the BBC/PBS production of â€˜Little Womenâ€™, which was huge for me. Since then Iâ€™ve filmed two feature films – ‘The Toll’, and ‘Gwledd’ – both of which are due for release in 2020, as well as Hidden of course!

Tell us about your character Mia Hidden.

She’s certainly not like any character I’ve played before. The upbringing she’s had has left its mark on her, and has left her with very little respect for anyone. She’s fearless, because as far as she can see, she has nothing to lose. She’s bright, articulate, artistic, eloquent, brave, and fiercely independent. She also seems to have more emotional intelligence than anyone around her – so it’s easy for her to manipulate, and run rings around the whole village.

As one of the main antagonists, how did you approach playing a character like Mia? How difficult is it playing a baddie?

I think it took more preparation. I had to ask a lot of questions, answer a lot of questions, and build a back story strong enough for me to understand, make peace with, and follow the same journey of thought and emotion that leads Mia in what she does. Once the prep work was done, playing ‘a baddie’ really is a lot of fun. I especially enjoyed the scenes in episode six, the mind games. Mia doesn’t speak all that often, but when she does, watch out! She’s a force to be reckoned with.

In a way, it’s quite freeing not having that worry. If people had disliked Beth when I played her in â€˜Little Womenâ€™, or had disliked my character Jen in the stage play ‘YEN’, I would have taken that to mean I’d failed really, because their likeability is crucial, its completely central to their characters. Mia, on the other hand, wouldn’t care about being liked, and therefore neither did I. If people can empathise with her, even if they don’t like her, well that’d be great.

What drew you to the part?

I’d been wanting to work with Ed and Gareth again for years. They gave me my first job after I left drama school (The Passing), and it was a job that gave me space to learn about film sets, and my role, as an actor, within that. I feel very safe working with them, and that meant I could relax, which meant I could be more ‘in the moment’ and deliver a better performance. Usually you spend the whole job wondering if the director is regretting giving you the job, desperately trying to please and second guessing your performance in every scene! I hadn’t worked with Chris Forster before but he was wonderful too, and I can’t wait to see what he goes on to film, I think he’s a great director. Aside from the team, it was also, obviously, a really dynamic part to play, and a huge contrast to the other parts I’ve played, so as soon as I read the script, I was really keen to play Mia.

How did the dramatic landscape in which the series is set impact on the drama of the series?

I’ve always loved Blaenau. It’s breath-taking, like nowhere else, and the people there are so welcoming, so generous. My own personal feelings aside, putting myself in Mia’s mind frame, I can totally understand how unescapable it’d feel, seeing black mountains surround you and tower over you, from every window, 360 degrees. At that age especially, without a driving license, how small your world would feel, and how futile it would feel to have hopes and ambitions.

The second series features a younger cast, how did you find working with the other cast members?

We spent many months in each otherâ€™s company, many days of which were spent sat in that blue car, in our own little bubble, keeping warm and out of the way. It became our little green room. We laughed more than you can imagine, and though you never see us even smile on screen, a lot of those scenes, for no apparent reason, were filmed on the verge of a fit of giggles. We’ve remained great friends, of course!