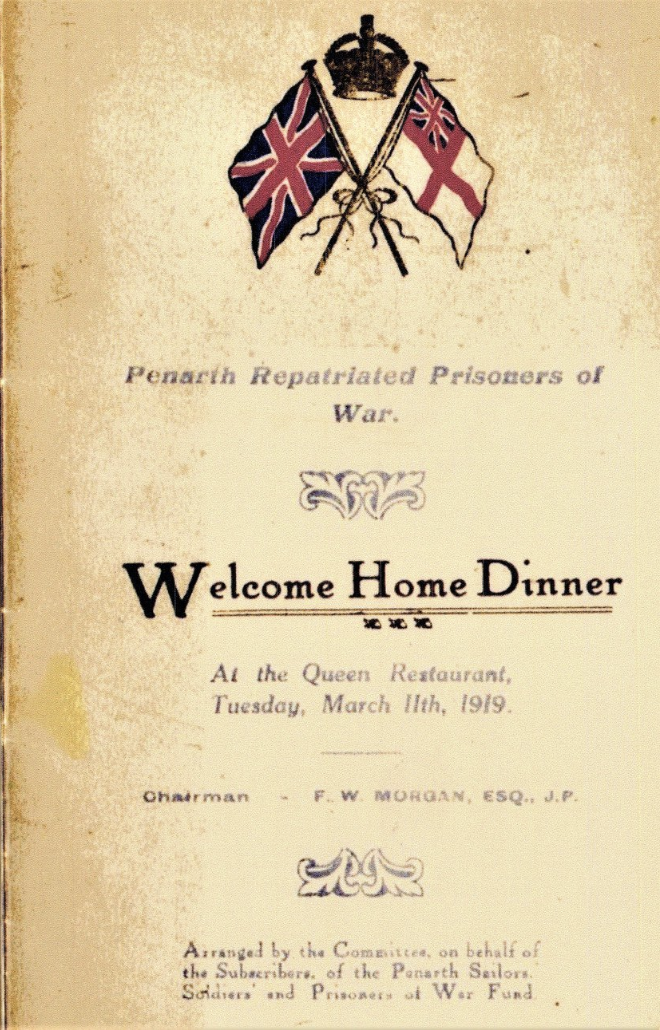 A Penarth historian who has been searching for the descendants of Penarth men taken as POWs during the First World War is planning a reception where some of the descendants can meet each other.

Bruce Wallace, who comes from Penarth, has been researching the lives of the men after discovering his grandfatherâ€™s name on a menu card for The Penarth Repatriated POWs Welcome Home Dinner, hosted by the Local Council. The Dinner was held in the Queen Restaurant, 1 Royal Buildings, Winsor Road on the 11th March 1919.

Mr Wallace has since been looking for descendants of 46 men listed as Penarth POWs. So far six people who recognised names on the list have come forward. He is now planning a reception where he hopes to meet the other descendants. The reception will be at the Conservative Club in Penarth on Saturday the 9th March starting at 2.00pm.

Mr Wallace said; â€œI am grateful to Penarth resident Dorothy Foulkes, granddaughter of Catherine Meazey (organiser of the WW1 Penarth POWs Parcel Fund) for providing me with a copy of the 1919 Dinner menu card because it contained the names and addresses of 35 returning POWs on it. I am also grateful to Marcus Payne for cataloguing all the references to POWs in wartime editions of the local pressâ€.

â€œThe Conservative Club was chosen because it is immediately across the road from where the 1919 Dinner took place. Representatives of the Town Council, local organisations and other researchers who have helped me in this project have also been invitedâ€.

Anyone who is interested in this forthcoming event or who can help find further descendants of the names listed below is asked to contact Bruce Wallace on 07817 583720 or on email; brucewallace.cowin@gmail.comâ€.