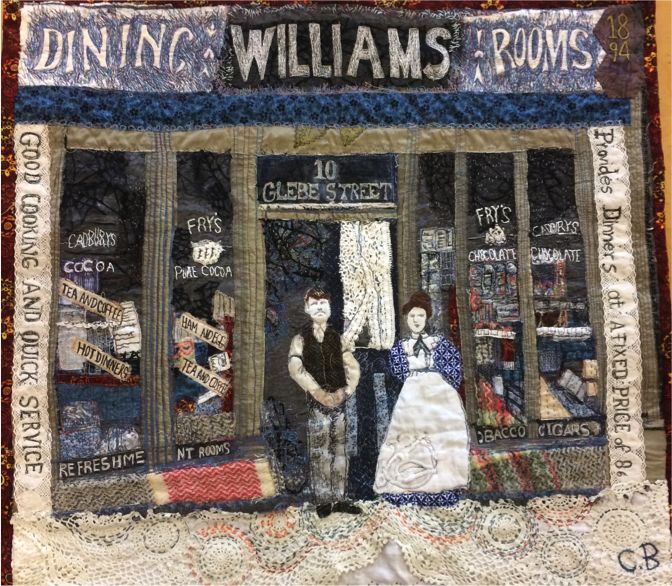 You may have heard of Carol Bartlett, Penarthâ€™s resident textiles tutor at Sew Lovely. Full disclosure: I also know her as my mum. But more recently, Iâ€™ve watched her become a fully-fledged artist alongside running our family business. Following great feedback from recent exhibitions at Waterloo Tea and the Swansea Festival of Stitch, itâ€™s fair to say that her work has resonated with the local community and beyond.

You may have heard of Carol Bartlett, Penarthâ€™s resident textiles tutor at Sew Lovely. Full disclosure: I also know her as my mum. But more recently, Iâ€™ve watched her become a fully-fledged artist alongside running our family business. Following great feedback from recent exhibitions at Waterloo Tea and the Swansea Festival of Stitch, itâ€™s fair to say that her work has resonated with the local community and beyond.

Combining her lifelong loves of sewing and history, her collection of stitched pictures is based on snapshots of Penarthâ€™s past. Carolâ€™s intention is to tell a story: â€œWe live in such a great town, and history is everywhere we goâ€. Together, a style of textile collage and the increasingly popular art form of embroidery work together to â€œexpress what we can still see all around us todayâ€. 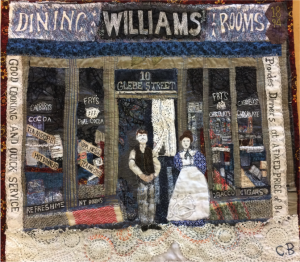 Carol began working on the series last year, after seeing an old picture of Sew Lovelyâ€™s former home on Glebe Street. Back in 1911, too, a haberdashery sat in that same spot. With many gorgeous Penarthian landmarks and interesting figures captured on film, inspiration never runs dry. I remember the project picking up steam last year, hearing the hammer of the sewing machine from her workroom all day long, watching an overflow of fabrics gradually crawl on to our landing. It was, in short, a passion project from day one.

In truly understanding the stories behind these scenes, history books and primary documents have proven helpful. They add some extra personality to the pictures in turn, such as that of Penarth Pier as it stood in 1907 â€“ a favourite in the series. Carol incorporated a postcard she found from the time, which read, â€œWe are having a lovely jolly time here todayâ€. This typography was embroidered along the bottom edge of her piece. 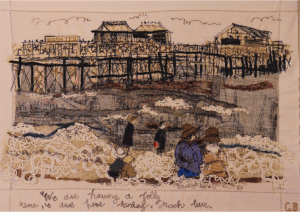 Most photographs of a bygone Penarth are of course black and white, so getting out and about is essential. Since many historic buildings still stand, sketching is an important step in building a richer interpretation of the landscape. Carol has begun moving further afield in this area; while returning from a summer camping trip in the Gower, we made a detour to Mumbles Pier. She had noted its affinity with our home town, and began sketching the coastline while we sat down for some tea. In the weeks following, I often found her snipping at denim jeans in her workshop, which would go on to recreate the pierâ€™s surrounding waters.

Years bordering the 20th centuryâ€™s arrival (1890 – 1950) are of particular interest to Carol. It was a time of transition: womenâ€™s working lives were changing, tourism was booming, and a fired up coal trade had led to an influx of building works. Researching this era in close detail, paying careful attention to the colours and textures of Penarthiansâ€™ wardrobes for example, pulled the period into 3D.

The piece which perhaps best captures this is The Bridge. Carol set to work on this with an 1899 Penarth Times article at hand, which allowed her a closer glimpse into its history. In this recreation, we can see Victoria Bridgeâ€™s grand opening attended by an entourage of gentlemen in top hats. â€œI like to imagine who they were, and really bring out their personalities,â€ she says. â€œUsing free motion embroidery â€“ where you draw with your needle â€“ that really helps to bring them to life.â€ WithÂ a final sweep of artistic license, every frame holds a sense of character. 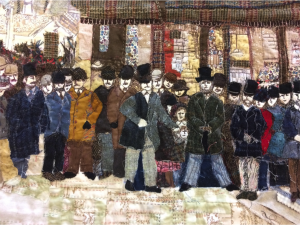 Alongside her tutoring work at Sew Lovely, each piece can take anywhere from two weeks to a month to assemble. The process involves finding just the right materials â€“ that is, laying out an assortment of fabrics and selecting those bits and pieces which best echo the fashions and sights of the time. â€œAll the time, Iâ€™m trying to think like an artist. The fabric is my palette and I can add light and shade with thread, and then the needle is the paintbrush.â€

Finding a rich source of materials, however, was a relatively easy task. Penarthâ€™s signature charity shop trade has kept her stores of lace plentiful, for example, but thatâ€™s just the start. Occasionally, Sew Lovelyâ€™s tutees leave spare fabrics behind after their workshop has finished up, while other customers gift materials such as tapestries and old garments. These donations, both witting and unwitting, are often reworked into the pieces.

Itâ€™s fitting that a collection about our town has a little community effort behind it. In turn, seeing it all come together has piqued the curiosity of its residents. â€œSome people have shown me their own work, using the style.â€ Carol says. â€œI think they enjoyed seeing how I interpreted a drawing into stitch.â€

She continues to take commissions, and will be holding another exhibition in Waterloo Teaâ€™s Cardiff branch. To see our townâ€™s past up close, take a trip to the cafe this October, located in the appropriately historic Wyndham arcade.