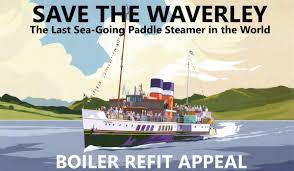 The fundraising appeal to save paddle steamer Waverley has reached its Â£2.3 million target just seven months after it was announced that the famous steamship would not operate in 2019.

The Boiler Refit Appeal has attracted donations from over 8,000 individuals with support from the Paddle Steamer Preservation Society, several trusts and Â£1 million from the Scottish Government. Arnold Clark and the Swire Charitable Trust have both just confirmed their support taking the appeal to its target.

Eddie Hawthorne, CEO & Group Managing Director for Arnold Clark, made the following statement: “I’m delighted that we’re able to contribute Â£50,000 towards the restoration of the Waverley. Arnold Clark understands how significant the ship and its heritage is to Glasgow and we were keen to help toward the Â£2.3 million fundraising target. I’m looking forward to seeing the Waverley on her way back ‘Doon the Watter’ soon.”

Waverley’s new boilers are currently being built by Cochran’s Ltd in Annan and are due to be completed in February. The work required on the ship will involve the removal of the iconic twin funnels to allow access to the boiler room. Waverley Excursions General Manager, Paul Semple, commented, “Thanks to the fantastic generosity of so many people and organisations we are now able to push ‘full ahead’ with Waverley’s boiler refit which will be the most substantial refit since her rebuild was completed back in 2003. I would like to thank everyone who has donated to the appeal and supported our efforts to save the last seagoing paddle steamer in the world.”

Waverley is owned by a registered charity and operated on a not-for-profit basis. The recent appeal for cash has been the most successful in the ship’s preservation career but ongoing support will be required given the annual cost of dry docking and refit. Mr Semple further commented, “the trustees of the Waverley charity believe that ongoing charitable giving must now form a greater part of Waverley’s long-term operational survival to ensure she remains in service. We are deeply grateful to all those who have helped this year, and in the months and years ahead, will ask those who care and who are able to help, to add Waverley to their permanent thoughts.”

Waverley will be moved from Glasgow to Greenock, under tow in January, where the major “open-heart surgery” will take place. The full works are expected to take around four months to complete allowing Waverley to undertake her regular cruises around the west of Scotland, the Mersey, Bristol Channel, South Coast and the Thames in 2020.

Here’s some interesting information about Waverley and the appeal to save it:

Paddle Steamer Waverley has operated since 1975 on a â€˜not-for-profitâ€™ basis and is owned by Waverley Steam Navigation Co. Ltd, a Registered Charity (SC005832). She was withdrawn from service in May 2019 due to structural defects in her boilers.

The Boiler Refit Appeal was officially launched on 15th June aboard Waverley at her Glasgow base.

Waverley was built in Glasgow for the London and North Eastern Railway and entered service on 16th June 1947.

Waverley is the last seagoing paddle steamer in the world and was gifted to the Paddle Steamer Preservation Society in 1974 for Â£1.

Since 1975 she has operated in preservation carrying over 6 million passengers, visiting many areas of the UK offering a variety of day, afternoon and evening cruises.

Waverley has a 4-star Scottish Tourist Board Tour Award and was nominated by the Sunday Times as â€œTop 3 nostalgic journey in the worldâ€.