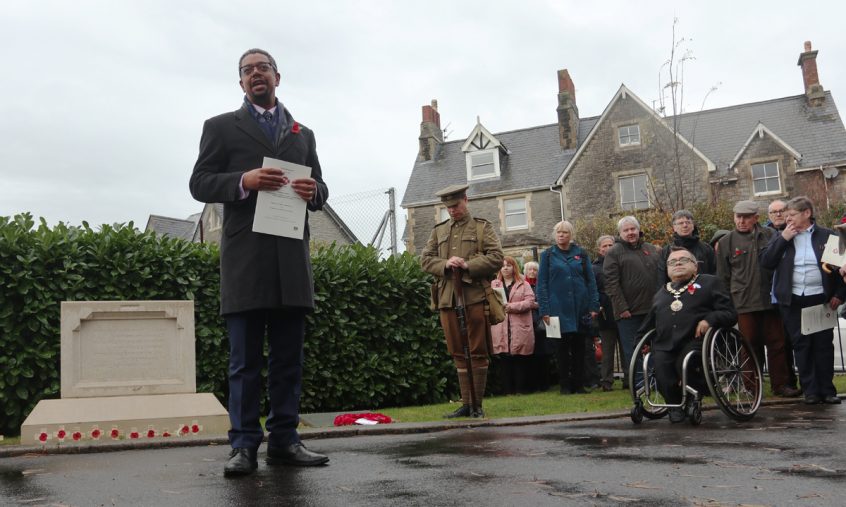 Novemberâ€™s Armistice centenary commemorations saw thousands across town come together to remember the momentous ceasefire in the Great War.

To mark the occasion, Penarthâ€™s communities had collaborated to remember the sacrifices made during World War One, the efforts of and effects on survivors, and the social changes that followed.Â

2018 has seen a number of important WWI related events in our community and the Armistice weekend brought commemorations to a climax.

On Friday 9th November, Penarth Town Council planted a commemorative oak at Cliff Walk on behalf of the town. In a service presided over by Rev. Peter Cox, the Town Mayor, Cllr. Jon Luxton dedicated the tree, donated by Roger Mundy in memory of hisÂ late father, Flying Officer A L (Les) Mundy.

Following his death his ashes were brought from Nottingham, where he died, and scattered in the churchyard of St. Augustineâ€™s Church, Penarth.

Secured with the help of Dr. Jonathan Hicks, the stones were dedicated in the presence of the families of both solidiers. Along with many hundreds of members of the public, guests included representatives of the Australian Government, LCDR Brad Rhodes; the Royal Tank Regiment , Colonel Commandant RTR, Maj General John Patterson CB and officers from the Regiment from Tidworth; the Royal Fusiliers,Â  Major Mick McCarthy MBE and Colonel Nick Beswick; staff and pupils from Llandaff Cathedral School, the Lord Lieutenant and ChrisÂ Coode and Robin Mellor of the Great War Society who stood watch over the stones in period uniform.

As part of the service by Rev. Peter Cox, Penarth Civic Society planted a rowan tree which was dedicated by Vaughan Gething AM. Victoria Primary School contributed a display of hand painted memorial stones.

Philip Morris of the Royal British legion performed the Last Post and Reveille and Richard James and Matthew Salisbury of the Legion led tributes, along with the Town Mayor and Dr Hicks.

This was attended by over a thousand visitors, where along with hearing the stories of Capt. Wain and Sgt. Pearse was an opportunity to see numerous projects developed by community groups and schools, memorabilia, history displays, music and film.

Dozens of community groups and individuals exhibited displays, with hundreds of children representing all schools in Penarth and helping to pass on the lessons of the Great War and its after-effects. Guests were moved by the performances of musicians from St. Cyres School and a choir led by Rosemary Cook.

On Saturday, St Augustinesâ€™s Church held an Open Church Extra which allowed visitors to learn more on the Roll of Honour memorial.

At All Saints Church, an open day showcased the 32 young men from the parish who perished in the War.

Thousands joined the Parade through the town, before pausing for the wreath-laying at two minute silence at the Garden of Remembrance. The Parade, organised by the Royal British Legion, continued to St. Augustineâ€™s Church, where a full congregation observed the Remembrance service, led by Rev. Mark Jones.

At Stanwell School, Stanwell RemembersÂ to honoured the sacrifices made. OnÂ Thursday 8th November, a pop-up museum was visited by many and included tributes fromÂ current students and those from local primary schools. In addition, the Performing Arts students brought some of the stories of these men to life through drama, music and dance.

Remembrance events were also observed at Penarth Yacht Club and local business Glass By Design organised a Town Window Display based on the 32 Penarth lives that were lost during the War. Wireart poppies are still in place in shop windows of independent retailers, with information on each of the men who died, the Roll of Honour.

Penarth Town Council wishes to thank all participants and attendees of events. The commemorations brought the town together and will live long in the memory of very many people.