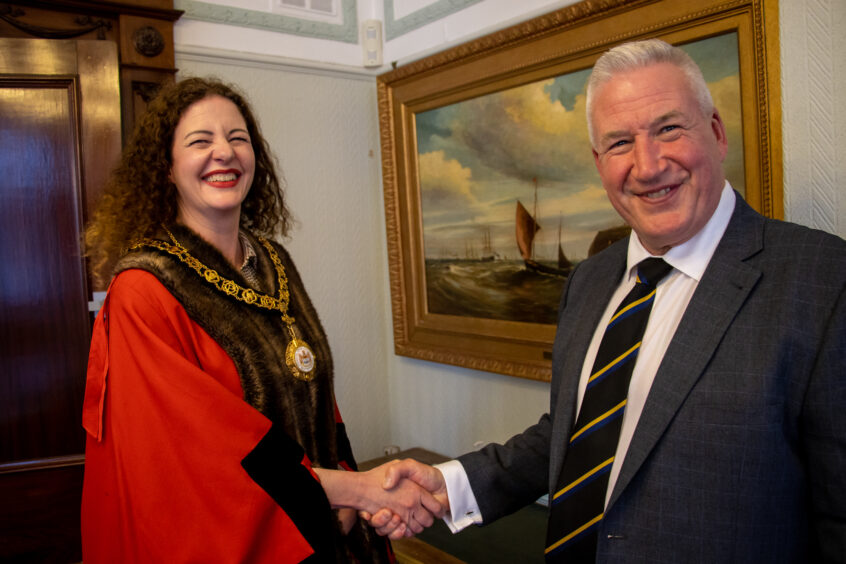 Cllr. Laura Rochefort has been elected as the new Town Mayor for Penarth 2022/23.

Cllr. Rochefort represents Cornerswell ward and is a member of the Welsh Labour group. The Town Mayor is elected each year by members at the Council’s Annual General Meeting. As Mayor, Laura will become the ‘First Citizen’ of Penarth. This means performing ceremonial duties, acting as the public face of the Council, and representing the Council at official and community events. Cllr Melissa Rabaiotti, of Plymouth ward, was elected as this year’s Deputy Town Mayor.

At the meeting Cllr Rochefort thanked all for her nomination and reported that she felt ‘privileged and honoured to represent the Town Council as the Mayor of Penarth.’ She thanked Cllr. I. Buckley and his Consort Mrs. Samantha Buckley for a fantastic year as Mayor and said, “I think we would all agree he has done an amazing job and has been truly involved in the community, whilst also adding fun and wit to every meeting.”

“Penarth has many great attributes, and we want to continue to offer the best for the community, young and old, and for our visitors, far and wide. We also want to continue to work with our local businesses for them to thrive in these trying times. Penarth is a beautiful place to live, and our community is an essential part of that beauty. Once again, thank you for the nomination, it is a great privilege, and I’ll do my best as your new Mayor.”

As well as dedicating time to civic activities, the Town Mayor is also responsible for raising money for charitable causes of their choice. At the meeting, the outgoing Town Mayor, Cllr Ian Buckley announced”

“I would like to thank Laura for not only her kinds words but also all the support she has given me as Deputy Town Mayor over the past year. Despite losing half the year to covid restrictions and purdah I’ve still had a busy year. With the help of the community, I managed to raise £8156.26 for my chosen charities: Woody’s Lodge & Amelia Trust Farm.”

For her Mayoral term, Cllr. Rochefort has chosen to raise money for Marie Curie Hospice, a much-loved charity in Penarth which provides care and support to people living with terminal illness and those close to them.

The Town Mayor’s first civic engagement will be the lighting of the Jubilee beacon on Thursday the 2nd June at the Cliff Tops followed by a special fireworks display.