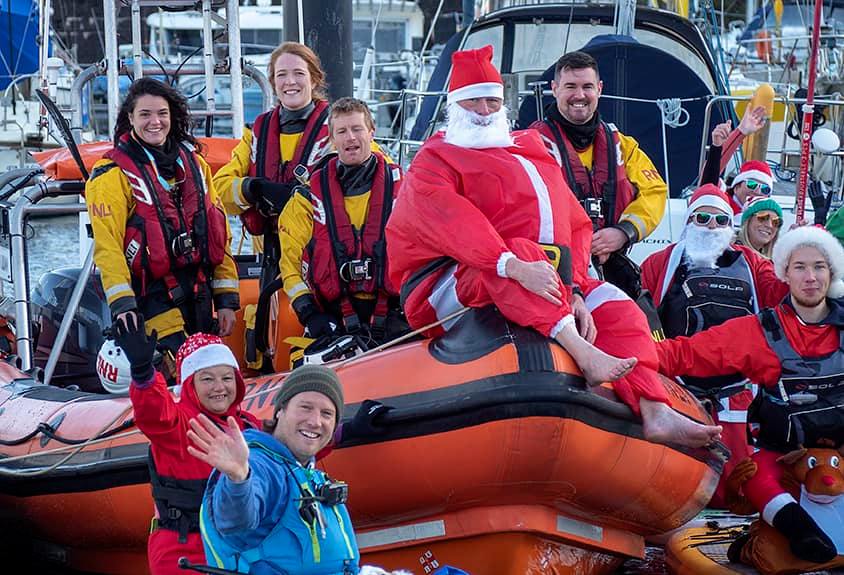 On Saturday 4 December, dozens of paddleboarders took to the water in festive fancy dress to raise funds for the RNLI.

The ‘Santa SUP’ morning, which was hosted by Penarth Marina, was one of a series of fundraising events organised by South Wales Paddleboarding Club and local surf and paddleboard shop Puravida Boardriders. Local restaurant The Deck also supported the event, providing a special lunch with all proceeds going to the RNLI.

After a tour of the marina, the festive paddleboarders were paid a visit by Penarth’s Atlantic 85 lifeboat, as the crew stopped off after finishing a training exercise.

The next fundraising event planned by South Wales Paddleboarding Club and Puravida Boardriders is a Bavarian Christmas Party on Friday 10 December, hosted by The Deck. Alongside food and drink there will be a fundraising raffle, with all proceeds from the night going to RNLI Penarth.

More information about the event is available on the Puravida Boardriders website.

“As watersports enthusiasts we’ve always been big supporters of the RNLI. But especially now, with the huge growth in popularity of paddleboarding, we want to support the RNLI’s work keeping people safe and educating people about how to enjoy the water safely.

“It was great to see so many people out enjoying the water on Saturday and helping to raise funds at the same time.”

Key facts about the RNLI

The RNLI charity saves lives at sea. Its volunteers provide a 24-hour search and rescue service around the United Kingdom and Republic of Ireland coasts. The RNLI operates over 238 lifeboat stations in the UK and Ireland and, in a normal year, more than 240 lifeguard units on beaches around the UK and Channel Islands. The RNLI is independent of Coastguard and government and depends on voluntary donations and legacies to maintain its rescue service. Since the RNLI was founded in 1824, its lifeboat crews and lifeguards have saved over 142,700 lives.

Learn more about the RNLI