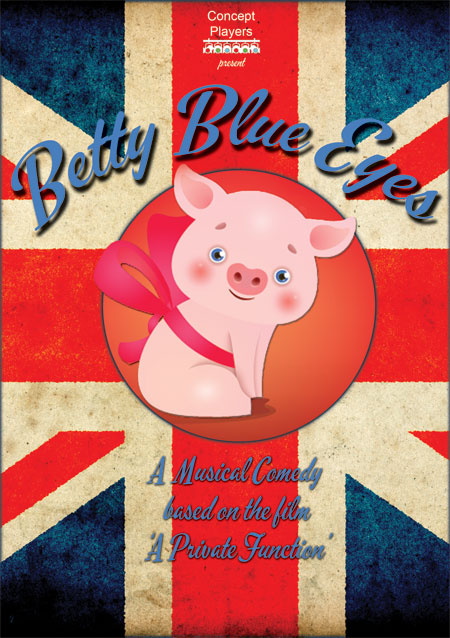 You are cordially invited to join Concept Players as they return this March with the extremely funny musical â€˜Betty Blue Eyesâ€™.
Based on the film â€˜A Private Functionâ€™, written by Alan Bennett and starring Michael Palin and Maggie Smith, itâ€™s a musical romp set around the impending wedding celebrations of young Princess Elizabeth to the dashing Philip Mountbatten in 1947. But these are desperate times where rationing is even worse than it had been in the war.
So desperate times call for desperate measures!
Enter the mild chiropodist Gilbert Chilvers and his social-climbing wife Joyce. When they are snubbed one too many times by the local establishment, Gilbert takes matters into his own hands and kidnaps a pig from the local bigwigs who were planning a very exclusive private function where the pig was to play a starring role – on several plates! Needless-to-say keeping a pig quiet in a suburban street proves rather difficult and hilarity ensues.
So join Concept Players, fresh from recent successes of â€˜She Loves Meâ€™ and â€˜My Fair Ladyâ€™, as they bring you this Stiles and Drew musical to life (the team behind â€˜Mary Poppinsâ€™ and â€˜Honk!â€™). You may not know the show now but youâ€™ll never forget Betty Blue Eyes once youâ€™ve met her.

This fun musical is brought to you by Concept Players, well known for their colourful quality productions so this isnâ€™t one to be missed.